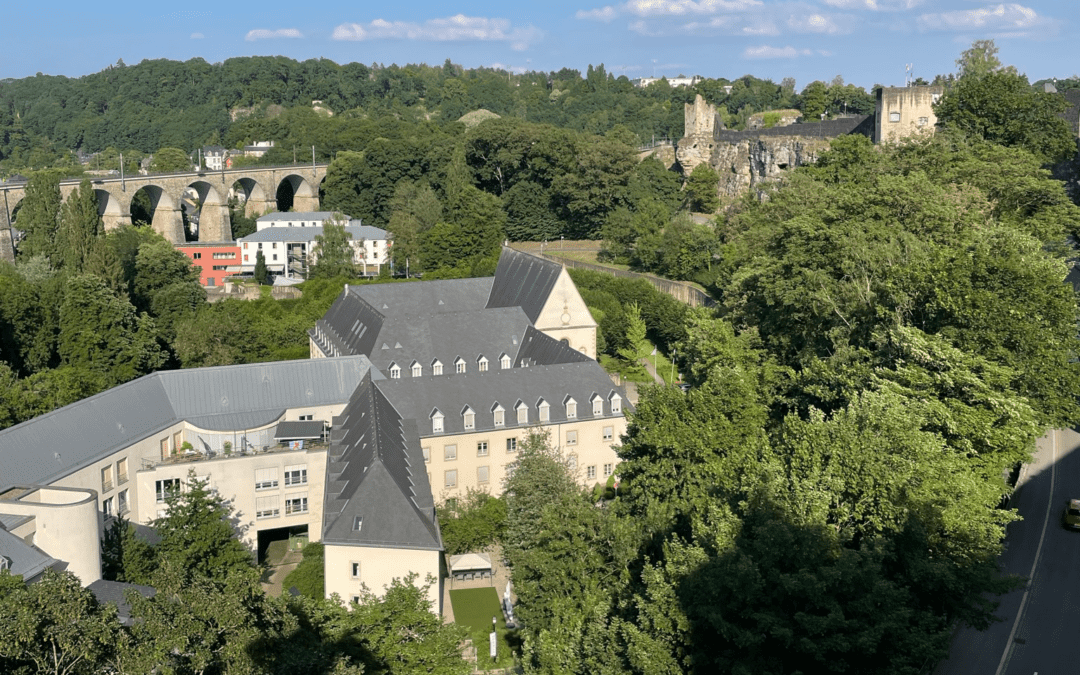 One of my favorite things about my two weeks in Germany was the ability to travel to nearby villages, cities, and countries. I traveled to Luxembourg on two separate occasions since it was less than an hour’s drive from where I was staying in the city of Bitburg. Luxembourg is a tiny land-locked country surrounded by France, Germany, and Belgium. According to Wikipedia*, it is one of the least-populated countries in Europe, with a population of 645,397 as of 2022. The drive to Luxembourg City, the capital, is very scenic since it takes you through the German countryside. These views are why my group and I went there twice. The first was for dinner, but we went back a second time much earlier in the day to explore the city properly.

As the city’s architecture began taking over the horizon for the first time, I grew increasingly excited to get out of the car and walk around. Luxembourg is incredibly charming, with a history that dates to the 900s. As a fan of the medieval era, it was incredible to see a city with this type of typography. It is unsurprising “that the City of Luxembourg was declared a UNESCO World Heritage Site in 1994 due to the exceptional preservation of the vast fortifications and historic quarters.”* While we did walk around a bit on the first trip, our second trip the following week allowed us to explore. Luxembourg is built as a fortress, and walking along its winding roads at various elevations is breathtaking. One of the must-do things we did was go to the Pfaffenthal Panoramic Elevator. This Luxembourg website states that this elevator “connects the city quarters of Ville Haute, the historical city center, with Pfaffenthal, in the Alzette valley below. It offers its passengers panoramic views of the Alzette River valley.” You can walk up to this point to reach the elevator to take it down and back up, which is what we did. The views were incredible. We must have walked 6 or 7 miles that day. For dinner, it was recommended to us that we go to a restaurant called Opera. We were a huge group of 14 people at this point, and the staff was very accommodating. We did call ahead to make the reservation, of course, and once we arrived, the table was set and ready for us. I thoroughly enjoyed the meal and the wine. They created a prix fixe menu that included an appetizer, an entree, and a dessert. We drove back to Bitburg late in the evening but luckily for us, since it was the summer season, it didn’t get dark in that region until about 10:30 pm at that time of year.